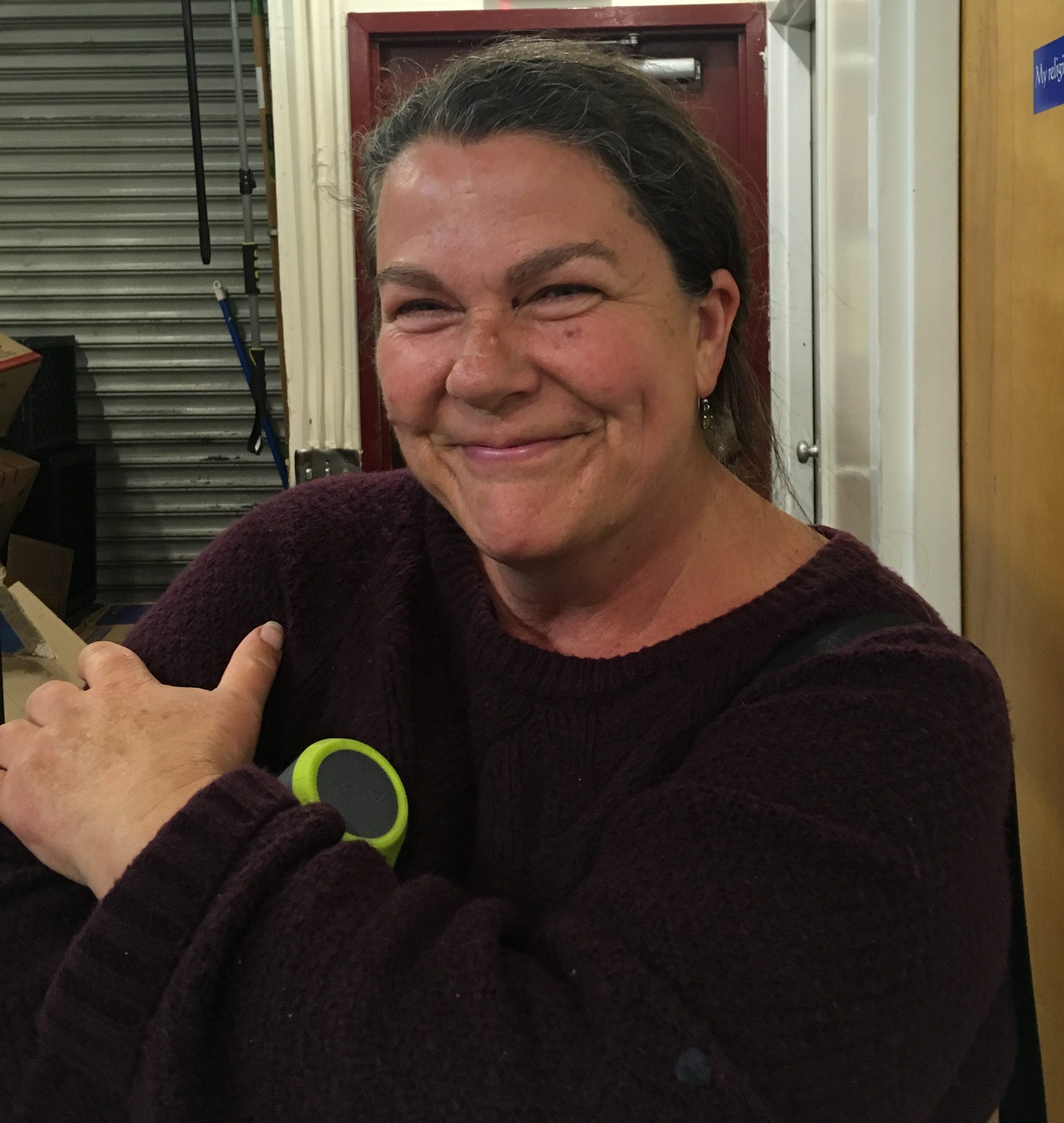 This month we sat down with one of our longtime volunteers to ask them more about she keeps coming back every month. Wendy has been volunteering with us for over two years and has helped raise money for us through her church’s annual event. You will usually see Wendy behind the stove, catching warm tortillas, and handing them off to the assembly line. Here’s what she had to say:

First off, what’s your favorite kind of burrito?

Wendy: I’d have to flip a coin between the Poncho Burrito and a Sushirrito!

How did you first hear about volunteering with us?

W: I saw an intriguing Facebook post describing this giving community, and an invitation to join in! I was particularly inspired by the groundswell of volunteers from various cities creating chapters of the Burrito Project in their own hometowns. There is now a USA map on the website with a constellation of chapters! The Burrito Project is a non-profit with an increasing number of volunteers and donations! There is no overhead or office, with the internet and teams being the form of organization and communication.

How long have you been coming to volunteer?

What keeps you coming back?

W: To be able to pay it forward and give a freshly made burrito to someone who maybe is just able to reach their hand out from under the flap of a weathered tent and hear their voice, or to hand a burrito to someone simultaneously pushing and pulling shopping carts with their dog following loyally behind them, or just giving someone a smile and sustenance, may feel like a grain of sand in the scheme of things, but may help cut through the loneliness and roughness they may have experienced that day and night and give them some energy, nourishment and hope. I often wonder about the story about someone, anyone, now living on the street. How many steps away am I from this experience? How many people live on the edge? This plight is magnified in San Francisco, and depending on which statistic you may want to believe, there are over 8,000 people without shelter and with food insecurity.

I am just so grateful that I found this enclave of caring people who have so much heart and spirit willing to lend a hand to those living with hunger. Jimmy, Eric, Emily, Donna, Dudley, Michael, Billy, Mike et al are such an enthusiastic and committed lead team. They organize, shop for ingredients, pull volunteer teams together, keep the website current and clean up to make sure the Martin de Porres cherished site is cleaner than when they arrived. This is also the place I first met Tyler, one of the SF kind-hearted originals now calling Colorado his home and where he has started a new Denver Burrito Project chapter. He is a mainstay and original team member who incidentally had the best playlist, and dance moves to guarantee that everyone kept tempo with the task at hand, from retro Donna Summer to ABBA to the Police. And did I once ironically hear Louis Armstrong’s “What a wonderful world?” in the background? Tyler also holds the record for tossing 12 tortillas onto the burning flames, then flipping them over to perfection to the ready plates. Billy and Alberto, the throwers who warm the tortillas to a perfect temp never take a break except to pull the cauldrons of rice and beans from the ovens when they need to be replenished. Teresa, a true gem of a soul, and I found our niche as the catchers ready to deliver the warmed and sometimes gently scorched tortillas to the waiting assembly line of volunteers ready to fill them. And then there is Wayne, who gads about, and bounds up on a chair and loudly announces in his baritone voice when we hit each 100-milestone increment. Our tribe is now preparing over 600 burritos per meeting time: assembled, rolled, wrapped, and accounted for just in time for the delivery team (by bike, foot, or car) to bundle them up, examine the locations map and distribute! Everyone seamlessly moves to the tasks at hand and anticipates the needs and quantities in the ebb and flow of making sure the ingredients are all added to the burrito until the very last one is rolled.

This monthly assembly of like-minded carers feels like a clan who truly care about each other, through genuine concern and interest in each other; from reaching out to each other in personal need, celebrating the birth of a grandchild, to checking in when someone is traveling, it seems like everyone watches out for each other and has their back.

Do you volunteer with any other organizations in the area?

W: Years ago, I phoned the volunteer coordinator of one of the largest SF shelters and was met with a tired and frustrated voice asking why I and so many others only want to serve Thanksgiving dinner, which had a lengthy waiting list, when there are so many other days in the year, like every day, when help is needed. It made me think of what it means to volunteer and to show commitment and dedication by showing up on a regular basis. I have volunteered as a Girl Scout leader for 27 years, and now am in the second generation with guiding my granddaughter Amy with all of the troop’s STEM, outreach, and adventurous activities while helping people at all times. I feel very lucky to be able to volunteer also at the Bayview Mission, St. Francis Food Bank, Laguna Honda Hospital, and with the dogs in custody at Animal Care and Control.

What advice would you give to someone who’s interested in helping their community?

W: People find their own way while following their interests and passions and see where their journey in helping others may take them. I am always questioning my imprint, which seems so small, but I know as a whole, with a dedicated team of people working together, the impact may be truly felt. I see the homeless through a different lens and perspective now, then when I made that first phone call, and it is through the time and care put into a project you believe in to reach out that makes a difference. Another way of helping out is through donations of goods and funds. St. Francis Episcopal Church holds a yearly fundraiser, with 10% of the profit given to a non-profit. The 2018 Cinco de Mayo Gala was a success and it was logical to choose Burrito Project SF as the recipient. Because it only costs less than $1.00 to make a burrito through Burrito Project SF, over 1,800 people were given a burrito through this fun effort. This is such a win-win-win… throw a party, designate a portion of the profits to Burrito Project SF, and help feed the world!